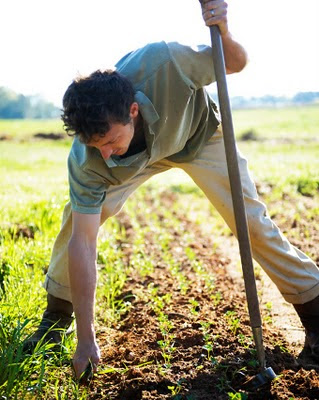 For those of you who have been following along, you probably know about FARM!, our first documentary about young farmers in Georgia.

We filmed it on a Flip Ultra in 2008. It was an official selection of the 2009 Rome International Film Festival and also showed at the EcoFocus Film Festival in Athens. Thousands of people have seen it online and at various private screenings. It is also part of the permanent collection of the Centro Internazionale Crocevia in Rome.

That was two years ago and a lot has happened to our original farmers since then. Along the way, we've also met more new young farmers. We picked up a Panasonic HPX170HDP2 camera. And we decided to make a new film, bigger and better than the last one. It's called GROW!

There is a burgeoning agricultural movement taking place in Georgia. GROW! provides a look at this brave new world of farming through the eyes and minds of young, new and seasoned farmers, their mentors, enablers and community supporters.

Because our food system is broken, our hope for GROW! as with FARM!, is to encourage more young people to take up farming, to offer a good argument for people with land to turn it over to young farmers and for communities to support these endeavors.

Anybody who appreciates the value of good wholesome food grown close to home, who cares about our food supply and the future of farming will want to see GROW!

We will be posting photos, film clips and updates as we go along. Stay tuned and GROW!

Posted by Anthony-Masterson at 12:58 PM

Original images and content by Anthony-Masterson are Copyright
© ANTHONY-MASTERSON PHOTOGRAPHY INC./All Rights Reserved/Use Without Prior Written Permission from Anthony-Masterson Photography Inc. is theft and a violation of applicable laws.
So... just ask us and get the images at the size and resolution you need (and avoid a nasty, expensive, legal mess).